There is no form with this name or may be the form is unpublished, Please check the form and the url and the form management.
For retail
For retail 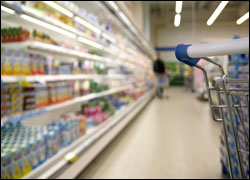 Development retail in Russia last decade occurred rough rates. Strengthened the positions federal trading networks: extending, increasing the share in the market, being consolidated with other operators. There were numerous regional networks... However, in connection with a world economic crisis, the further development of a retail began to have some difficulties, having faced the fallen solvent demand. First of all, of course, it was tested on themselves by operators of the networks trading in the goods of long using. But also in the networks realizing the goods of group FMCG, negative consequences of crisis were obviously notable. So, many grocery retail with which works Prosto Petro Group, mark decrease in the average check, transition to cheaper goods and decrease in quantity of buyers.

The forecast of development of the Russian retail for 2010 (according to RIA "RosBusinessConsulting") assumes decrease in a cumulative turn of branch to 30-40 % in cost expression, strengthening of consolidation at the expense of bankruptcy of small and average players, increase in a share of the goods under private marks of networks and the cheap goods in assortment matrix, and also decrease in the average check for 15-30 % depending on a trade format. However crisis bears in itself not only negative consequences, but also possibilities for growth in the future and increases of overall performance of operators of the market, therefore the companies which will worry crisis, become the largest players of branch. As a whole prospects of the Russian market of network trade are estimated by the western companies and analytical agencies rather positively, already in 2011-12 the Russian retail trade will start to leave crisis. According to Euromonitor, experience of the European crisis 2002-2004 and the Argentina crisis 1999-2002 Has shown that consumption of goods FMCG starts to be restored approximately in 2-2,5 years after the crisis beginning.

In a context of event Prosto Petro Group offers the special program of cooperation for retailers. This program includes a package of proposals including various variants of cooperation on deliveries in retail networks of foodstuff, both under Trade marks of our firm, and under Marks belonging to directly trading networks. It is necessary to notice that the majority of the products which are let out Prosto Petro Group, is positioned as the goods of average and low price segments and, at the same time, as the goods having deservedly high reputation at consumers, thanks to the quality. The specified circumstance, from our point of view, can be of special interest at present for a retail.

More in detail about a package of proposals you can learn, having addressed to us with official inquiry on one of the e-mail addresses specified in section "Contacts".